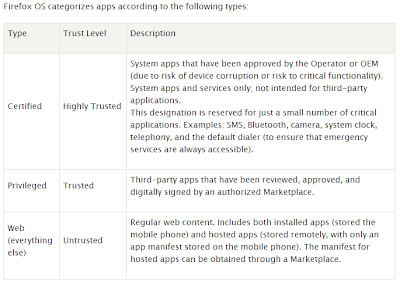 The power of a good headline is hypnotic. The one taking a lot of security news during these days is the “Found first malware for Firefox OS”. The title is attractive, but, is it right? Reading the news invites to think about what has really happened, what is this “discovering” about, and why we haven’t overcame still so many myths.

Firefox OS is a recent operative system based on web. All its programs are web based, created using JavaScript, CSS3 and HTML5. This implies that applications may be distributed in two ways: in a zip that contains it all, or via an URL that hosts it and is later visited.

A 17 years old by has developed a malware proof of concept for Firefox OS. He will be presenting its research in a convention in November. He states that his application allows to perform some potentially unwanted remote tasks over the device, and that is able to control it sending remote commands.

First of all, security model


According to Firefox OS security model, “uses a defense-in-depth security strategy to protect the mobile phone from intrusive or malicious applications. This strategy employs a variety of mechanisms, including implicit permission levels based on an app trust model, sandboxed execution at run time, API-only access to the underlying mobile phone hardware, a robust permissions model, and secure installation and update processes“. So far (except the way hardware is accessed), nothing that any other operative system doesn’t implement (and nothing that really may stop “infections”).

Something that, in some way, may make a difference in Firefox OS, is how it classifies permissions in apps. There will be three different kinds:

Let’s see now what can be deduced from the announce of the program created by Shantanu Gawde.


Differenciate between the “what” and the “how”

A teenager has created an application that makes unwanted actions on the system. He talks literally about “infecting” and “control like a botnet”. About sending commands to access SD card, about “spooking the user remotely controlling FM radio”, “upload and download multimedia files”. It seems to be able to control certain device apps, but we do not know how far it may go.

Is this malware? It depends. There will be legit applications that will need to access SD card data, contacts, etc. It will be allowed because the user will trust the vendor or developer. As the Firefox OS security description document states, the model is based on application trust.

What may attract some attention is the state about controlling other apps (he specifically talks about controlling FM radio). Talking about “sending commands” invites to call it “malware”, too, though, once the application is installed, it seems quite easy to send commands… so in general, the problem is not so much “what” does this proof of concept do, but “how”, how does it get the necessary permissions and how it got to get them. With the information we have, we guess the user launches an application hosted in a server and accomplish some tasks that may be potentially unwanted by the user.

To get to the real scope of the statement, we should answer these questions.

Without these answers (between others), information may be based just on speculation. And the developer should have answered them beforehand in his statement, just like others do, so we can understand (without the need of technical details) how he got it and not describing so much what he got. It should be highlighted that he states that the purpose of the PoC is of course to motivate developers to ensure better security on their platforms rather than providing inspiration to those with malicious intents.

Anyhow, the “malware” or any other in the future will not be exactly a surprise. When execution of uncontrolled applications and alternative “markets” are allowed, abuse is practically guaranteed. Although it’s through restricted applications, many of them will not need special permissions to infect with “adware” and show ads, and some other may just find some ways to bypass permissions leveraging vulnerabilities or design flaws.

A Firefox OS spokesman states that possible, Gawde relied on developer mode functionality, which is common to most Smartphones but disabled by default. In addition, we believe this demonstration requires the phone to be physically connected to a computer controlled by the attacker, and unlocked by the user. In other words, they think he has “cheated”. Of course, they try to downplay the issue because of the lack of information.

So, without any more actual data, the headline should be that a researcher has possibly found a design flaw or a way to bypass some security in Firefox OS, executing privileged remote actions on the device. But we can’t be sure yet. What is for sure is that, talking about “malware” confuses the user, that may feel menaced without an actual reason to… yet.

Sergio de los Santos
ssantos@11paths.com
@ssantosv
How to use Metashield protector for Client and why using itHookMe, a tool for intercepting communications with API hooking

Find out all about #CyberSecurityPulse, our Telegram cybersecurity news channel.
How does Apple's and Google's technology developed for tracing Covid-19 infections work?
We already have a winner of TheTHE's plugin contest. Discover our collaborative tool for Threat Hunting teams.
Discover how VCryptor ransomware works and the tool we have developed as part of NoMoreRansom.org to decrypt it.
Critical-Severity RCE Vulnerability in Cisco Unified CCX Cisco has fixed a critical remote code execution bug in the Java Remote Management Interface of Cisco Unified Contact Center Express (CCX). This...
Social engineering is being used more than ever by cybercriminals. What do Decepticons have to do with it?