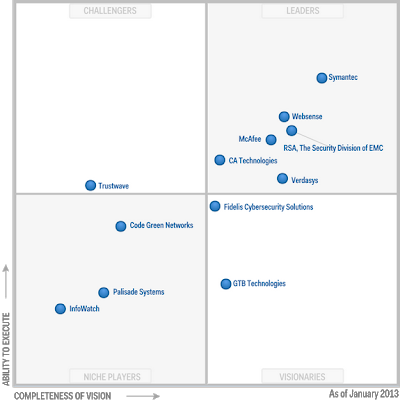 Gartner has released a study that classifies the most important companies that offer Data Loss Prevention (DLP) solutions depending on their position, strategy, effectiveness, and market leadership. We have made a little experiment to test if these same companies control metadata leaks in their own services, as a potential sensible data leak point.
According to the “Magic Quadrant for Content-Aware Data LossPrevention” research made by Gartner in 2014 over 50% of companies will use some kind of DLP-solution to keep their private data safe but only 30% will use a content based solution.
This same research lists which are the leading companies in terms of data loss prevention establishing a scale based on factors such as Content-Aware proportioned DLP, DLP-Lite products and if a DLP channel is available for the user to clarify doubts about regulatory compliances, for example.

This study made by Gartner determines which are the leader companies when preventing leaking information, establishing as measurement factors to generate leadership indicators as: provided content-aware DLP solutions, DLP-Lite products offered or if they provide a DLP channel to the user so he can clarify doubts about compliments, for instance.

Do these companies avoid information loss through metadata in their systems? We conducted an analysis of the main web pages of these aforementioned companies that were included in Gartner’s study using MetaShieldForensics. Metashield automatically downloaded and analyzed every document exposed on the corporative webs of the companies.
The following table displays the results. Every single company leaks metadata associated to their public documents that are being exposed on the Internet. Seemingly these documents are not being cleaned and are thereforea potential private information leaking point that is to be taken into account.
Based on this information we proceded to graph the data showing the amount of information being leaked by the studied DLP companies. Logically the companies that most suffer of information leaks also have more publicly available documents in their web pages.
Names or account names followed by internal directories where the documents were created are the most commonly leaked pieces of information. Another usual leak is the the software version being used when generating the document. This group of information is valuable for a potential attack.
Let’s see some details about the leaked information:

Conclusions
Metadata may still be widely unregarded when controlling information flow exposed on corporative webpages or simply sharing documents..
Information leak can happen at very different levels and in different ways. Document loss, non-controlled publication and non-intentioned document exposing is indeed a clear example of a problem to be avoided, however document metadata can’t be despised either, specially by a company that offers data loss prevention solutions.
Metadata and information leak shall not be regarded as a singular incident that only provides an attacker a document, an email or sensitive data. It’s also a process that a determined attacker will invest his time into. Depending on the implemented solutions and how protected the company is the attacker will gather all possible information taking advantage of every single leak (as inconsequential as they may seem) for getting to know his target and forging an attack.
The companies that offer solutions against information loss should take it into account in their own products. For example, erasing of metadata is a compulsory task for the Civil Service according to the “Esquema Nacional de Seguridad” (National Security Scheme) and LOPD. MetaShield Protector is a solution that some of them chosed.
Rubén Alonso Cebrián
ruben.alonso@11paths.com
Mobile banking and banking trojansWhite Paper: Practical hacking in IPv6 networks with Evil FOCA

Don’t run away yet! This era is not about machines enslaving humanity (at least, not yet…) but about the introduction of elements (IOT devices, cloud environments, IA, Big Data, SIEM,...
The Internet is full of articles explaining why ransomware should not be paid. And they are probably right, but if you don’t make a difference between the type of ransomware and...
New banking trojan called Vizom IBM Security Trusteer’s research team has published a report analysing the new “Brazilian family” banking Trojan called Vizom. This malicious software uses similar techniques to...
This was the 8th edition of the Security Innovation Days 2020 so far. Three intense days in which innovation in cybersecurity and the digital transformation have been the essence...
Second day of the Security Innovation Days 2020, focusing on the new capabilities we have acquired as a cybersecurity company from Telefónica Tech. A few weeks ago, we announced...
First day of the Security Innovation Days 2020 completed with more than 1500 people connected from all over the world. If you missed the first day of our cybersecurity...

Recently, MacOS included a signature in its integrated antivirus, intended to detect a binary for Windows; but, does this detection make sense? We could think it does, as a...