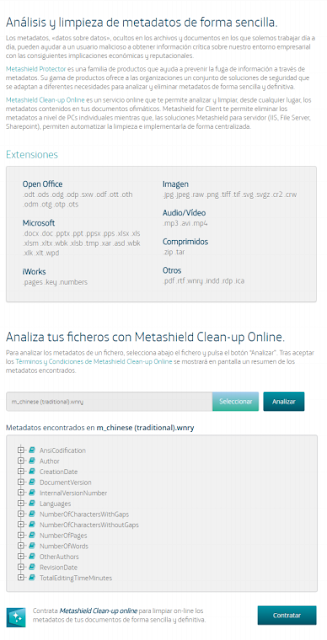 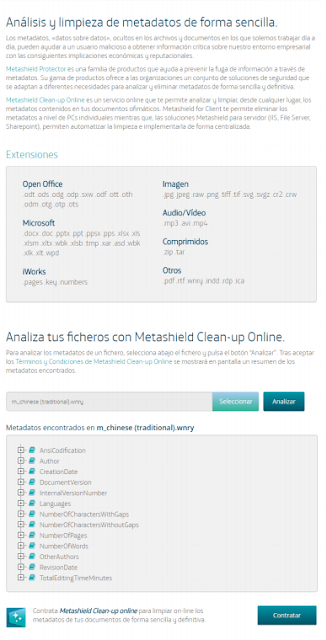 It is hard to say something new about Wannacry, (the ransomware itself, not the attack). But it is worth investigating how the attacker worked during last hours before the attack. It does not let us uncover the creator, but for sure makes him a little “more human”, opens up a question about his mother language, location and last hours creating the attack.


Wannacry (the ransomware again, not the attack) is a very easy to reverse malware. No obfuscation, no anti-debugging, not a single mechanism to make life harder for reversers. Aside from the code, some companies have even tried linguistic analysis (it has been widely used recently) to try to know where the author comes from (although it turns out to be from China, “more than often”). Result is usually “maybe English native speaker, maybe not, maybe native Chinese trying to mislead analysis…” who knows. But one thing we may know for sure: he likes football, is not greedy and usually types in Korean language.

Metadata to the rescue

It has been proved, during recent years, how useful is to analyze and extract metadata and hidden information from files. Data is the new oil.
Not only sensitive information about the user or organization, software, emails, paths… but others like dates, titles, geopositioning, etc. We have heard about spying, politics scandals because of altered documents, insurance frauds…, and everything revealed thanks to metadata.

Wannacry 2.0 uses some text files with the instructions to show in a textbox. At first sight, extension WNRY does not mean anything, but they actually are RTF files. And that gives some space to work with metadata. From this analysis using our new tool Metashield Clean-up Online, we could find “Messi” as a user in the system, and, more interestingly, languages, dates and editing times. About Messi, we discovered that some user already mentioned it a few days ago. But let’s go further.

There was a Wannacry 1.0 version, around March. It only contained a
language file, m.wry, that was a RTF and was available only in English. This file was created 2017/03/04 at 13:33:00, and modified for 2.6 hours until 17:37:00. These are local timezones, wherever in the world the attacker was. The Internal Version Number was 32775. This is a number that Word (or any other RTF creator, although Word specifically uses 5 digits) adds when a RTF file is created, but is not officially properly documented by Microsoft and seems to be unique. But this Wannacry version was unnoticed in a world full of ransomwares. Then Wannacry 2.0 and a wormable attack came through. This was a slightly improved version, with lots of different languages, aside from English. What about their metadata?

It is at least very interesting to know that the attacker created (in his harddisk, at least, maybe copying it from somewhere else) all the documents between 13:52 and 13:57, just a day before the attack (11/05/2017). Again, this is local time wherever part of the world he was. He opened English file first, at 14:42.

After that, most of the others files were sequentially created (or again, dumped from some zip file or disk) until 15:00. Chinese (traditional) and Chinese (simplified) where the last ones, opened almost 4 hours later, at 18:55. He spent 11 minutes editing the simplified version, but just one minute with traditional. Prior to that, he spent 4 minutes editing English file. Japanese and Vietnamese took him 4 minutes of editing as well. Vietnamese was the last file to open from the first round, maybe because files where alphabetically sorted. It did not even edit Swedish, Latvian, Czech or Greek language files.

Author field for RTF files was set to the word “Messi”, as in WannaCry version 1.0. That means, that is the user name is configured in its Office Word version and probably his Windows user too. He may like football. Internal Version Number was again 32775 which may mean he reused the template.

A very insteresting metadata is language. 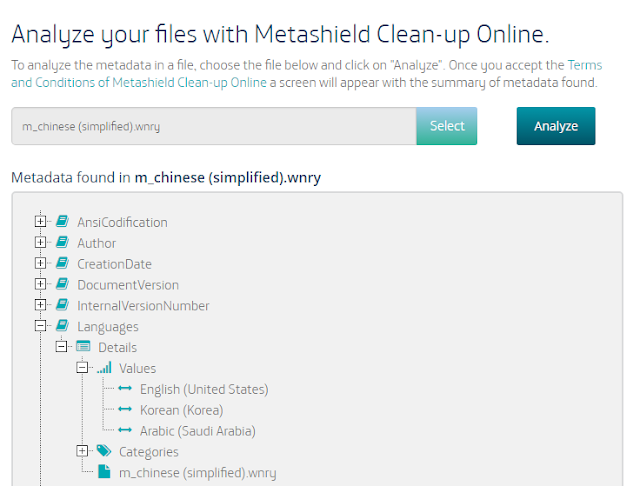 All the files, no matter the language they are written in, uses English, Korean and Arabic as metadata “Language”. These are the language that Word expects you to write in, and are filtered trhough Word to RTF files. Why this three? Does he uses all of them? No.

This is the raw data “inside” the RTF.

So it means he uses some kind of EMEA version of Word (very common) and  Korean is the default language for typing in Word.

What about other metadata?

An interesting point is that he uses a zip file that contains the Wannacry ransomware (again, the ransomware itself, not the tool) to inject into the wormable system. This is (in version 2.0 and some versions 1.0) a password protected file (1.0 was wcry@2016, and 2.0 WNcry@2ol7). As we know, from our previous research with Gmtcheck for Android, zip files store the Last Access Time, and Create Date from the (supposed) NTFS filesystem of the attacker, with his own timezone applied. So, the dates in a zip file, are the dates in the attacker timezone. It means that, analyzing the zip, we could deduce the following:

Even servers, because is the time stored in the zip file, and when the malware extract its own files, this same value goes with it. That is why this value of “last time accessed” is in every affected system, because it comes directly from the unzipping action that the worm makes.

Since we have no UTC reference, we may create this table. Each line represents a hypothesis: Let us suppose the local time the zip is created (12/05/2017 2:22), occurs in all possible and different GMT timezones. We have added some “facts” that we know happened for sure in a specific UTC time. For example: 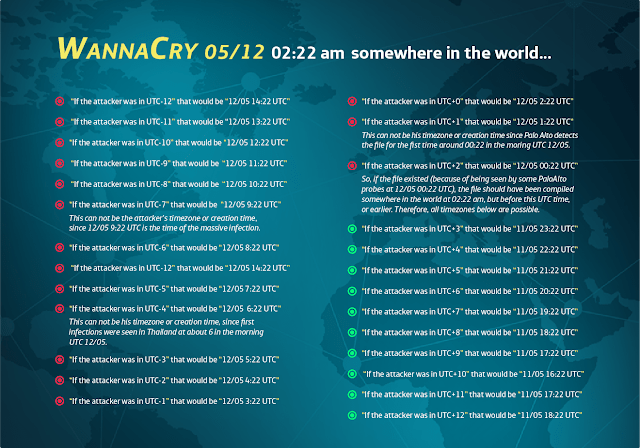 So, let us imagine. If the attacker was in UTC+9 (Korea), as they say, that would be 11/05 17:22 UTC. He created the ransomware, went to sleep (it was 2:22 morning for him, and spent the whole day “working”… ) and 7 hours later (around 12/05 00:00 UTC), the first sample was seen somewhere in the world. Does it make sense? Or maybe, he spent that hours joining the ransomware to the EternalBlue exploit. Or maybe he was a Spanish guy (UTC+2 at the time) and, just when ready, he let the file go and Palo Alto detected it right away… Remember the word “Hola” is embedded in the assembly. 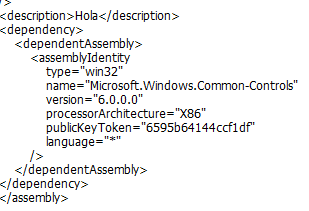 Regarding interesting strings… another from version 1.0, is this “test esttesttest strator” that appears in c.wry, where some .onion and dropbox URLs are… draw your own conclusions.

Playing attribution is risky.
These times and hours may be legitimate, or directly fake. He may like
or hate Messi. The problem is, since these are all local times, we have not found an UTC reference that enables us to know the precise timezone of the attacker. We may suspect it is UTC +9 (Korea time). However, the real thing is that, we can only make some assumptions.