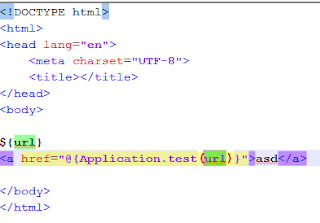 Play Framework is defined as “The high velocity Web Framemork for Java and Scala”. We use it internally in some of our products. Ricardo Martín from our QA team has found a (could be permanent) XSS that has now been solved by the official team. This XSS could make all the platforms based on Play Framework, more prone to phishing attacks or able to steal data from users.

When Play framework had a problem with the URL parameter. When it parses the view, it translates it to an URL that will work as a GET request. If the parameter value starts with “:”, some exception is launched and fails to escape the value:

How to get the URL parameter:

Then, URL goes through the program. Example of XSS injection encoded:

There is a condition that does not allow to encode the injection. In fact, the code in Play Framework made it clear:

Whenever the view is interpreted, when translating to an URL that will work as a GET request, we may use it as a parameter to print it as a result.

We developed a PoC and sent it to developers. Versions 1.2.7 to 1.3.0 have been tested to be vulnerable. Just a week after making them aware of the problem, this alert has been released, that solves the problem: https://www.playframework.com/security/vulnerability/20150506-XssUrlParamerter.

This report has been drafted by Roberto Santos and Javier Rascón from the CSIRT-SCC (Security Cyberoperations Center) Research Team, in collaboration with ElevenPaths.  At the end of June 2019, a big Spanish company was attacked and thousands of their computers were impacted. Such was...
Dallas, Singapore and Madrid, February 18th, 2020 – The Telco Security Alliance today announced new collaborative efforts designed to further enhance the ability to detect and eliminate threats from customer environments.   Members of the alliance —...
TheTHE, a unique tool within its category that allows analysts and hunters to carry out their research tasks in a more agile and practical way.
Globally, Distributed Denial of Service (DDoS) attacks have become more prevalent, powerful and sophisticated. Attackers continue to see great success from using DDoS attacks as a major attack...
After developping a wide portfolio of Cloud Security Services, ElevenPaths has been recognized by its Strategic Partner Check Point as a CloudGuard Specialized Partner.
What is Apple doing about Shlayer malware? We analyze the main tools that MacOS is using to face this threat.

Globally, Distributed Denial of Service (DDoS) attacks have become more prevalent, powerful and sophisticated. Attackers continue to see great success from using DDoS attacks as a major attack...
Recently, MacOS included a signature in its integrated antivirus, intended to detect a binary for Windows; but, does this detection make sense? We could think it does, as a...
Imagine yourself in a lab over an experiment. You’re asked to analyze the following number sequence: 2, 4, 6 This sequence follows a rule. What do you think the rule is?...