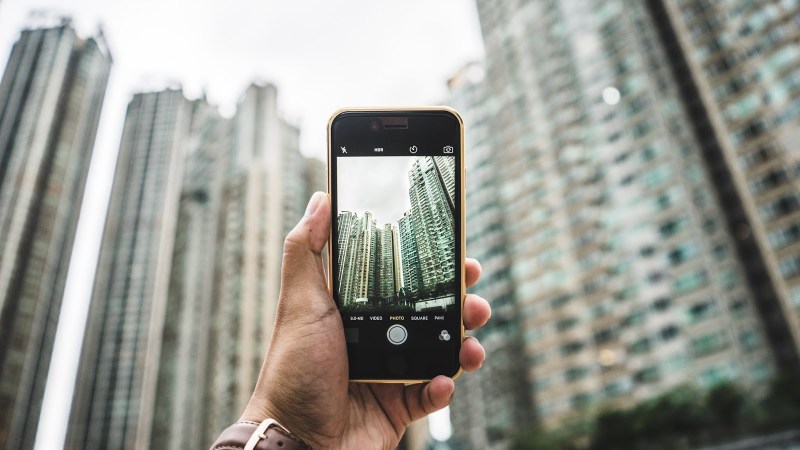 On our blog, we enjoy sharing the applications of Big Data and Artificial Intelligence in sectors that may surprise you. Previously, in “Dining with Data” we saw how customers may be able to order pizza with their eyes, and how doctors can be trained with Virtual Reality. Today, we are going to explore the world of digital photography. This market is expected to be worth $100.79bn by 2021, and as technology has developed, the industry has become more accessible to all. Below you can find out five examples where AI is helping both amateur and professional photographers when shooting and editing.

Taking photos with our phone has come a long way since Sharp launched the first camera phone, the “J-Phone” in 2000 (it’s worth reading the comments on the article for some entertainment). We can now shoot incredibly high-quality pictures and videos without the need for bulky camera equipment. One of the trends in recent years has seen many top-end cameras include two rear-cameras in order to offer a portrait mode that can achieve the “bokeh” effect (Japanese for blur) in which the subject is in focus and the background nicely blurred. However, in the future, we may see this switch again, and instead, an AI camera based on Machine Learning (ML) algorithms may replicate the effect. The Google Pixel 2 is one such phone already using this. These algorithms get smarter over time and have been “trained” to detect which part of the image is the subject in order to then blur the background.

Next, we turn to the subject of image processing. Artificial Intelligence’s power doesn’t stop as soon as we take a photo! Traditionally, if a photo is in JPEG format, trying to scale the photo up will usually lead to an unsharp and blurry image. Once again, AI, and in particular Deep Convolutional Neural Networks (CNNs), appears to offer a solution. “Let’s Enhance” uses CNNs which have been trained on a huge library of images so that when you upload an image, it is capable of detecting certain features (e.g. a wall, or skin) and adds extra detail to the image. In this way, it can scale a JPEG image up to 4x without losing quality. Why not try it out for yourself?

In October 2017, tech giants Google announced “Google Clips”, a wearable camera that takes the potential of AI to another level. The device is designed to “capture and save moments” from daily life. Once turned on, the camera will start capturing what it sees, and with the use of AI it will retain the “highlights” and discard the unwanted parts (for example, when a hand blocks part of the camera). It then sends these clips to your phone, where you can edit the photos and choose your favorites. Clips uses Google’s people-detection algorithms to identify the content of the image (smiles, surprises etc) and is an example of “machine vision”. For some, the idea of having a camera recording daily life may be too intrusive, but it is nevertheless a fascinating example of AI’s capabilities.

As mentioned previously, there is currently a wide range of phones capable of taking exceptional quality photos. According to DxOMark, one of the most well-known testers of cameras, lenses and smartphones, the Huawei P20 Pro is currently the leading option when ranked by smartphone image quality. One of its key features is its Neural Processing Unit (NPU) that powers its AI capabilities. For example, when taking a photo, the phone uses AI to detect 19 categories of “scenes” and apply appropriate image adjustments in order to create ever-greater images.

We’re going to finish by looking at Arsenal, not the football team, but the “intelligent camera assistant” created by Ryan Stout. As you can see in the video below, Arsenal has some impressive features that revolve around its AI which controls the setting of the camera (exposure, aperture etc) based on the scene it is shooting. Once again, it uses Neural Networks as the foundation of its capabilities. Broadly speaking, the process involves detecting the content of the image, comparing these finding to the thousands of photos it has been trained on, and then suggests the best settings based on 18 factors. One example of where Arsenal comes into its own is “image stacking“, the process of taking multiple photos in order to capture all the detail in a scene at various exposures. The device takes a number of photos, merges them, and then exports them directly to the camera’s SD card. A quick glance of the comments on the YouTube video below shows the divide between those excited by this powerful tool and those who feel it is borderline “cheating” and takes the skill out of taking photos.
For many people, the joy of photography is in the composition of the photo, and developing the editing skills yourself. As such, it is likely that some may be weary of the “invasion” of AI into this sector, and may view it as a threat to their skills. However, everyday consumers are likely to eagerly anticipate technology that can help them take even better pictures to share on social media. Which side of the fence do you sit on? Let us know down below!
Coca-Cola’s use of AI to stay at the top of the drinks marketA digital twin to save the Mar Menor