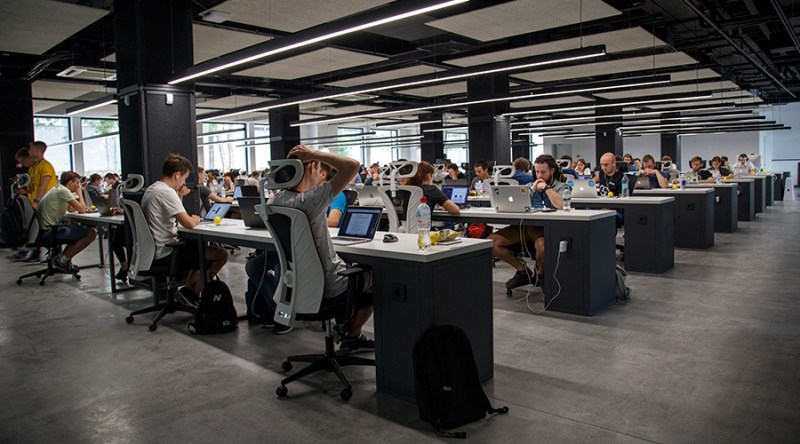 9:10 Daniel crosses the building entrance with his employee card and presses the elevator call key. The small screen announces that your elevator will be number 4. Already with that small gesture the building is more efficient, because depending on the people that are waiting and what plant they want to go, it reorganizes traffic in the most efficient way.

9:15 Entering the office has never been so rewarding. Upon entering the door of the third floor of Telefónica IoT, the living room videowall announces that the company congratulates him for being the employee of the month. What a pleasure! It was ready (and connected) to surprise him, with a team like that it’s nice to go to work.

9:30. After turning on the computer and checking the mail, Daniel receives a notice on his smartphone for the meeting he has in 20 minutes. He still has time to have his second coffee of the day before the meeting. Thankfully, they digitized the office and now he can access the coffee machine with his employee card and get whatever he wants, even though he just realized that he forgot his wallet when leaving home. The good thing about the new office is that the work sites are not fixed and as he knows today will be a busy day, so he chooses to sit in the bench area, which allows more mobility and doesn’t bother your colleagues.

9:50. Before the meeting, Daniel sends the reports for the meeting to the printer closest to The Thinking room, the space enabled for videoconferences, from the office. This way he can take advantage and prepare the reports and contents that he has to present more easily. He arrives at the room five minutes before the meeting, and then he prepares his computer and his presentation to have it ready just in time. His correspondent connects to the video call on time when he receives the meeting start notice.

11:00 After the meeting, it’s time to leave the office and visit several new clients. His partner Marta has just sent all the information about them to his mobile. With this information in hand he gets the most efficient route which reduces travel time and fuel consumption of the company car.

13:00. After a morning of visits, it’s time for lunch. The clock vibrates to warn him that he has fulfilled his goal of steps for today, and he still has the afternoon! Daniel usually takes a tupperware with his food, however, today he has forgotten and he is starving. Thankfully, with his mobile he can access his restaurant tickets and pay in the office dining room.

15:30. Back in his desk, he begins to hear a rumor that is becoming stronger. It seems that the sound comes from The Big Living, other partners are already approaching the area. It’s good news, a new agreement has been reached with a partner to help him digitize his merchandise tracking.

16:00. “What an intense day!” Daniel thinks as he sees a new meeting alert on his mobile. This time it will be in the The Meeting room, since The Storming was busy, to update the department team with the news. Daniel has reserved the room through his mobile and has sent all the information he needs to the computer in the room, so he can keep his hands busy with the sweets he has bought on his way out of the office to celebrate with his team being the employee of the month.

17:00. Daniel has to take one last task head on. In order to be more focused and close the day, he prefers moving his things to The Diving to finish the last documents and make the last calls. Once installed, he realizes that he has left his jacket in the chair of one of his companions, but he does not need it, the rooms are regulated intelligently and the temperature is very pleasant, without peaks of cold or heat, which helps avoid the fights over the temperature that his wife tells him she suffers daily in her office.

17:30. After a final review of all the tasks of the day, Daniel schedules his agenda for tomorrow and shares it with all his colleagues, so they can be aware of the planning and to better fit the meetings and activities of the next day. He turns off the computer, takes his forgotten jacket, and say goodbye to the office by passing his employee card through the exit. In the garage, his car detects the keys in his pocket and opens automatically. He has his belt placed and again on route, according to the one indicated by your GPS, to pick up the children and spend the rest of the afternoon with them.

Madrid is IoTIoT Activation: the IoT Program for Startups