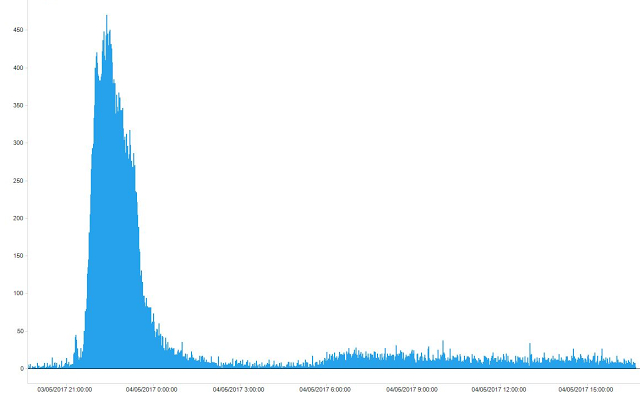 
Very few people use their mobile phones without installing Whatsapp. The application gives thousands of millions of people the possibility to share their lives daily with their friends and family worldwide. Therefore, any kind of disruption to this service is capable of provoking a chain reaction. Once one method of communication fails, people will always manage to find another one to take its place. As soon as problem arises with this network the first reaction is sign in to another form of social media.

On the 3rd of May of this month, that is what happened exactly (and for some people it really was a disaster). Whatsapp’s service was stopped for 3 hours, between approximately 9pm and 12am at night. This loss of service gave us at LUCA the chance to carry out a small study to find out how users feel the need to communicate and the big move towards another massive social media platform, Twitter. This was followed by people sharing their reactions with the general public. The study also provides a sentiment analysis for the tweets that were written overnight.

We focused on the tweets shared in Spain that included the term ‘Whatsapp’. In order to enable a more in depth analysis from the lack of service we used tweets that were taken from the early morning of the 3rd of May until the afternoon of the 4th of May. The final dataset therefore includes information about the sentiment, country and the autonomous community from which it was sent and final the language used for the tweet.

By completing an analysis surrounding the numer of tweets that were sent before, during and after the service problems, we can clearly visualize the time in which the highest number of tweets were registered per minute.

At a quick glance it is possible to observe various patterns. During the day of the 3rd of May, tweet levels were considerably low before the service problems. This can be considered as the normal amount of tweets relative to the use of ‘whatsapp’ in the body of the tweet. At around 9m we find the first spike in tweets which coincides with the service problems. Following this initial increase, we can then observe a snowball effect, at ten thirty that evening we saw 874 tweets sent in one minute. Throughout the entire period of problems with Whatsapp a total of over 74,000 tweets were sent. This leads us to the conclusion that 75% of tweets were sent during the period of problems with Whatsapp.

As for the impact of the drop in service on the users of this application, we have obtained an analysis of the sentiment of the tweets issued by each user. A ranking algorithm is responsible for categorizing each tweet by assigning it with a positive, negative or neutral label.

With Figure 4 we focus on the highest spike in activity with which we have previously commented. We first note that the number of tweets flagged as neutral is significantly more than the rest. In theory this may indicate that the drop in service may not cause as much damage as previously thought the reputation of Whatsapp.

Once the service ws restored and the users in Spain began their new day, the activity surrounding the term ‘whatsapp’ remained relevant as we previously mentioned above. This second stage seen a mostly neutral commentary, although the difference between tweet with negative and neutral feeling is much lower.

The tweet with the greatest impact was shared by the National Police, inviting users to stay calm and enjoy the opportunity to talk to the people who live in their homes.

Indeed, from this small study we can conclude that with the fall of one communication service as used as Whatsapp, other networks will then echo this fall and establish a mass conversation. Another interesting analysis would be to find out which users were regular tweeters before the creation of this hashtag or with the service problems signed in to Twitter as an exception. Humans are social animal by nature, even it is to communicate that there are problems with communication.