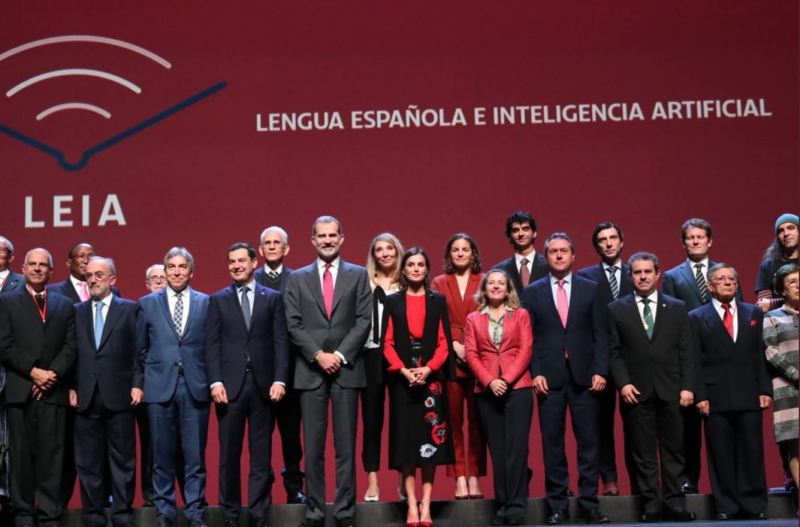 Last Friday, Chema Alonso and I had the opportunity to attend the closing session of the 16th Congress of the Association of Spanish Language Academies (ASALE) in Seville organised by organizado por la Real Academia Española (RAE). During the event, presided over by the King and Queen of Spain, the LEIA (Spanish Language and Artificial Intelligence) project was presented, a very exciting plan that has been supported and promoted by Telefónica since its inception. The aim of LEIA is the defence, projection and correct use of the Spanish language in the field of Artificial Intelligence and current technologies.

The LEIA project also has the collaboration of leading technology companies such as Google, Microsoft, Amazon, Twitter and Facebook, which like Telefónica with its Artificial Intelligence Aura, are opting for the use of AI in virtual assistants such as Alexa and Cortana in their services to enrich the relationship with their customers. This has a clear impact on the language used by these services and these companies do not want to miss this opportunity to take advantage of technology to promote the correct use of the Spanish language.

In the event, these companies together showed a video with some of the tools that already exist or that will be developed in the context of LEIA as a product of the interaction of Artificial Intelligence applied to language with the resources of the RAE. In the case of Telefónica, through Aura in Movistar Home, customers can resolve any queries they may have about spelling, grammar or foreign words, providing information that motivates them to learn and enjoy the language from the comfort of their own home.

Telefónica’s collaboration with the RAE began with the participation of José María Álvarez-Pallete, Chairman & CEO of Telefónica, in the 8th International Congress of the Spanish Language held in Cordoba, Argentina, on March 27. During his speech he called attention to the rapid evolution of technology and stressed the importance of promoting the use of Spanish in this technology so that it is not relegated to second place to other languages such as English, and the need to train algorithms with the appropriate data to preserve the use of correct Spanish.

Chema Alonso emphasised in the framework of the event that “we are exposed to an unprecedented technological avalanche, we have to ensure that Artificial Intelligence not only speaks Spanish so that it is an inclusive technology that benefits all Spanish speakers, but also that it speaks it correctly. It is therefore very positive that through LEIA we can now take advantage of all the linguistic resources of the RAE”.

In addition, Telefónica and all the technological partners have made our collaboration in the project official by signing an agreement in which we undertake to use the RAE’s resources such as dictionaries, grammar and spelling in the development of our voice assistants, word processors, search engines, chatbots, instant messaging systems, social networks and any other tools, as well as following the criteria for the correct use of Spanish, approved by the Royal Spanish Academy.

The RAE was founded more than 300 years ago to maintain the unity of the Spanish language. With LEIA, the aim is now to achieve the same for the Spanish of machines.

I would like to conclude the article by mentioning the special thrill I felt when I heard the King say the name I chose for the project.

Big Data, the fuel for Digital BanksTelefónica receives the award as a leading AI company at the GLOTEL Awards thanks to Aura

A smart city is defined as a high-performance urban environment, where the aim is to optimize the use of resources and access to services. Smart cities take advantage of technological...
Healthcare is a sector that is continuously generating a large amount of data. To put it in numbers, every year our National Health System manages 234 million medical consultations...
Before tackling the digitalisation of their organic cherry orchard, the Vicente brothers, the caretakers of the Frutas Mifra cherry farm, had to ride around the entire farm on a...
Two 0-day vulnerabilities exploited in Microsoft Exchange The Vietnamese cybersecurity team GTSC reported two 0-day vulnerabilities in Microsoft Exchange three weeks ago through the Zero Day Initiative (ZDI) that are...
Nowadays, speed and immediacy is a necessity for almost any company, especially for those in the logistics sector dedicated to the transport and delivery of goods. Due to the...
Dozens of vulnerabilities are discovered every day in the current landscape (an average of 50 in 2021), and attackers are finding new and ingenious ways to exploit them. It...