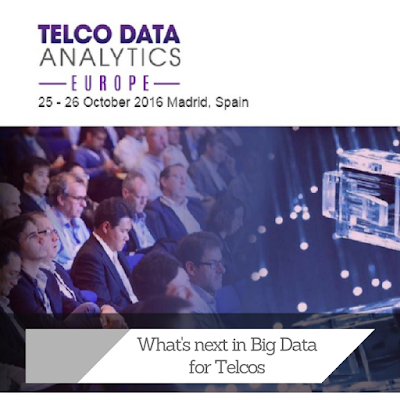 
The European version of Telco Data Analytics Conference took place on October 25 and 26 in Madrid. This annual event also takes places in the USA and this year there were approximately 100 participants from Operators, Vendors, Startups and OTTs. For the first time, Telefonica was the “host operator” of the event which was run by KNect 365.

Chema Alonso, Chief Data Officer of Telefonica, gave the opening keynote where he argued that taking data-driven decisions is now a must for all organizations, emphasizing the growing importance of security and privacy for any Big Data initiative.

Phil Douty, Director of Partnerships and Strategic Alliances of LUCA discussed the power of anonymized and aggregated telco data enabling the understanding of a representative cut of the population, which can be extrapolated flexibly to show real behaviours. Phil transparently talked about the learning curve for telcos in the Big Data business: it takes time, money and learnings from mistakes being
made. The accelerating pace of change in telco Data Analytics means that anyone
who is still learning now, will struggle to catch up.

A panel discussion on how to create a first class Data Science team brought to bear that there are different types of data professionals including Data Engineers (Data Plumbing), Data Scientists (analytics) and data-savvy managers (turning insights into actions), and because those profiles are very hard to find in the market, training of existing employees is very important. It also became clear that creating a team of Data Scientists is not enough to ensure impact; the rest of the organization also needs to have the right “data-oriented culture” such that insights are put into action across the organization.
Another discussion, led by Dr. Sebastian Fisher, Data Scientist at Deutsche Telecom, reminded us that for machines to be truly intelligent, they must be able to perform Reasoning, Knowledge Representation, Planning, Natural Language Processing, Perception, and manifest General Intelligence. As on many events of Big Data nowadays, Artificial Intelligence is getting increasingly more attention.
BigML, one of the companies present at the conference, is a startup whose mission is to make Machine Learning easy. BigML offers a tool with several Data Science algorithms so that non-data scientists can execute clustering or predictive algorithms on (quality) data. BigML won the Partnership Award for its collaboration with Teléfonica Open Future_ in creating PreSeries, which uses BigML’s algorithms to predict which startups will be successful; a truly data-driven approach!

Another question which was discussed on the IOT analytics panel was: if you had $100 million to invest in IoT, what would you invest in? All panel members agreed that part should be invested in security: when everything (people and things) are connected to the Internet, the risk for abuse and disasters increases significantly. Several studies have shown that security in IoT requires more attention. Another suggestion was to invest in “innovation at the edge”, that is, to invest some of the money in IoT-related startups so that the projects are not hindered by the rules of large organizations, which can hinder progress. Finally, for IoT Analytics to really take of, thriving ecosystems are fundamental, probably around a few main platforms in the world that will host a large share of the IoT data available. Such platforms would then give secure and “permissioned” access to data to developers, startups and businesses in order to create value.

The last topic which was discussed was Big Data for Social Good, explaining how Big Data, and more specifically telco data, can help measure progress on the 17 Sustainable Development Goals of the United Nations. More details can be read in this post.

Can Big Data reshape the Outdoor Media sector?Big Data for Social Good: How 6 billion mobile phones are social sensors to save lives