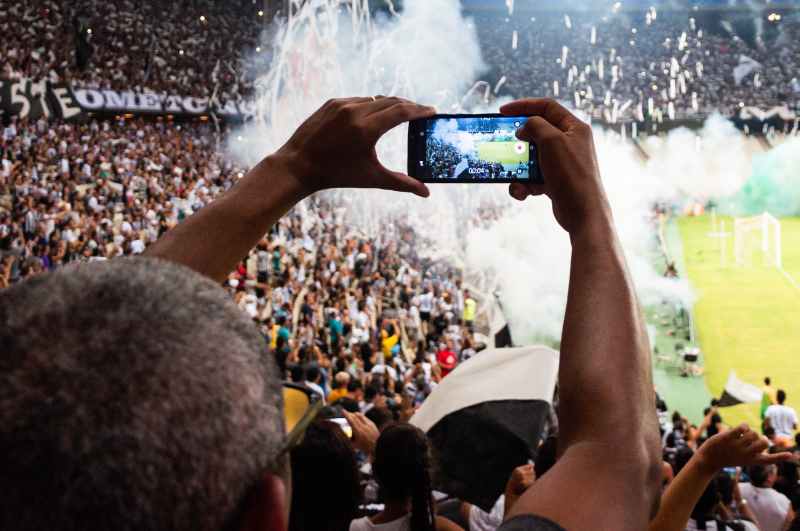 As we all look forward to returning to live events in a post-pandemic world, in today’s post we share with you the latest exciting innovation in smart stadiums, the implementation of in-stadium 5G coverage.

5G Is set to be a game-changer for fans at home and in the stadium, allowing for enhanced IoT connectivity, faster internet speeds and better quality live streams for those unable to make it to the match.

This is no distant dream! In 2019, Telefónica teamed up with FC Barcelona to deliver Europe’s first 5G connected stadium at Camp Nour and many football clubs and stadiums worldwide are following suit. In the US alone, there are 13 NFL stadiums connected by a 5G network powered by Varizon.

Powering the passion for the game

Stadiums have always been more than simply physical spaces, they can be defined better by the atmosphere created in them as fans and players come together to celebrate their love of the game. Promoting this passion that spectators have is the main driver behind sports clubs seeking 5G coverage in their stadiums.

The atmosphere of camaraderie is promoted by allowing fans to connect easily to social media platforms. Previously, low bandwidth and high latency often prevented game goers from accessing the internet quickly or to any usable extent. This is due to the extremely high levels of traffic within the stadium. Now, thanks to the upgraded network, fans will be able to tweet, share and react to game updates in real-time, allowing for a more interactive game experience for those both inside and outside the stadium.

Over the last few years, many football clubs have invested in IoT technologies in their stadiums to improve the game experience for fans and allow for better crowd management. Back in 2018, Telefonica teamed up Atletico Madrid to deliver the world’s first smart stadium at Wanda Metropolitano , implementing enhanced IoT powered security management systems, smart scoreboards and a wrap-around IoT powered LED lighting system.

By upgrading network coverage within the stadium, sports clubs are laying the infrastructure for the next generation of IoT technology powered by 5G. A 5G network can support far more connected devices than previous network generations, paving the way for even more innovations to be introduced in the future such as security cameras, crowd control technology and smart information displays.

And for those stuck at home…

As we are currently unable to go to live games due to the Covid-19 pandemic, it has become more important than ever for sports clubs and broadcasters to deliver the best live streaming capabilities possible. Thanks to the increased capabilities of IoT connected devices, the quality of live streams has increased dramatically. According to FC Barcelona, 5G technology allows for the live streaming of 4K 360º footage, allowing for fans to experience the game in real time virtual reality, totally redefining how we watch games from home.

We cannot underestimate the power of 5G to revolutionise the way in which we experience live sporting events. As more stadiums implement this technology, we will soon take for granted the ability to connect to social media easily whilst in the stadium and remotely view games in 360º 4k ultra-high definition. Further to this, the capabilities of IoT devices within stadiums are significantly enhanced thanks to 5G, bringing never before seen innovations to stadiums around the world.

The Smart Train – The key to future sustainable mobilityHow should you speak to children about Artificial Intelligence?

In today’s post, I will share with you how Waste Management is set to be revolutionised by Big Data and IoT (Internet of Things) technology.  The  Social Importance of Waste Management  Waste management is increasingly becoming a...
Last week I shared with the 101Blockchainscommunity of professionals and digital innovators the Blockchain vision we have at Telefónica and how companies can create value by adopting this technology. If...
Increasingly, energy management is becoming a topic of great social importance. In today’s post, I will explain how IoT (Internet of Things) together with technology Artificial Intelligence (AI),...
It would be fair to say that 2020 has not been a great year for retailers around the world. As many high street stores have been forced to temporarily...
At the end of 2019, according to IoT Analytics, there were already 9.5 billion connected devices for consumers, businesses and scientists. The forecast for 2025 is three times this...
Mobility is one of the key factors to consider in order to make cities more efficient, a necessity taking into account the millions of citizens travel to work or study centers in their vehicles. Taking...