I propose you the following game of luck:
Which option would you choose? A sure profit or the possibility to win twice more (or nothing)? If you think like 84% of the population, you may have chosen option A: a sure profit. Ok, so now I will propose you another scenario. You must pay a fine and you can choose how to do it:
Which option would you choose now? Would you pay the fine or would you flip a coin, considering that you may pay nothing (or twice more)? In this case, if you are like 70 % of the population, you may have chosen option B. So, are you doing it well or not? Ok, let’s analyse what’s happening here purely from a rational point of view.

According to the expected utility theory, you will always choose the option that maximizes decision utility

The expected value of a decision E[u(x)] (or the return that can be expected) is calculated as the product of two simple amounts: the probability of the income p multiplied by the value (or utility) of the income u(x). That is to say: the more likely it is that you win something, and the greater value it has, the higher will be the expected value. This is mathematically represented as follows:

If we were 100 % rational, by using this formula we would always know what to do at any time and how to take the ideal decision. For this purpose, we would only need to calculate the probability of each decision, its utility, and then take the decision that maximizes the expected value. Unfortunately, humans are not rational decision-making machines. We are not “homo economicus” with the ability to perform a perfect cost-benefit analysis and subsequently to choose, completely objectively, optimal results. Leaving games of luck behind, the nice Expected Utility Theory engages two big errors when we apply it to our everyday life:
To put it in context, let’s analyse the two initial proposals considering this theory.
Regarding the game of luck, the expected value for option A is:
E(A)=1.0∙1,000=1,000
While the expected value for option B is:
E(B)=0.5∙2,000+0.5∙0.0=1,000
Both values are identical! Therefore, purely from a rational point of view,
both should be equally important to us. What about the second scenario?

In this case, the expected value for option A is:

E(A)=1.0∙(-1,000)=-1,000
While the expected value for option B is:
E(B)=0.5∙(-2,000)+0.5∙0.0=-1,000
Once again, they are identical. Consequently, once again, it would be the same to choose one over the other. So, why do most of the people choose option A in the first case and option B in the second scenario, instead of choosing any of them? Because we are not purely rational!
Of course, our brain doesn’t calculate anything. It only applies a heuristic: if you can certainly win something, just take it and don’t risk it for more; if you can avoid a sure loss, take the risk even if the potential loss can be higher. When equivalent incomes and losses are weighted, the latter
“outweighs”.

Indeed, win satisfaction is far lower than the pain of grief. It’s quite easy to understand it: if you go out with 100 € but you lose 50, your subjective assessment of this loss is higher than if you go out with no money and you find 50 €, even if, objectively, such incomes are equal. In both cases you come back home with 50 €, but the process is not at all indifferent to you.

According to the Prospect Theory, our loss aversion will lead us to risk more to not lose rather than to win
Do you remember the last entry, A story about two minds: the vast difference between real and perceived risk? The behavioural economics modern psychology establishes a human model radically different from the “homo economicus”: when our brain, under uncertain circumstances, faces a complex situation, it just replaces the problem with a simple one. This is due to heuristics or “thought shortcuts”, that lead us to take “irrational” decisions, although perfectly justifiable.

The following mathematical curve shows graphically the basis of the Prospect Theory, developed by Kahneman and Tversky: 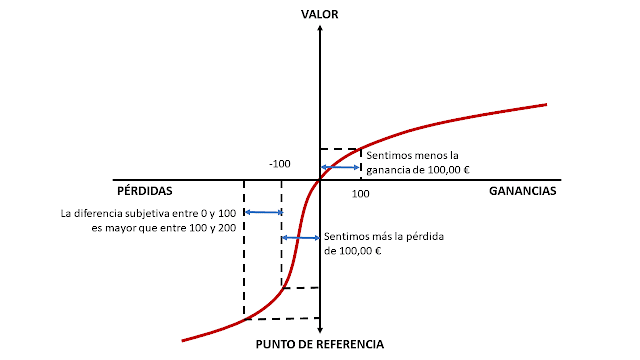 This curve lists three essential cognitive characteristics of the Prospect
Theory, related to System 1:
A Decision Theory in the field of Information Security
Considering the abovementioned information, two ideas are becoming clearer:
In such circumstances, it is worth pondering about the following two hypotheses on how you will invest in security measures depending on how
information is presented:
Let’s see an example. Imagine that your company has allocated a budget to fund an information security package. Without such aversion, your company losses have been estimated to be 600,000.00 € (financial, physical,
data, reputation and time losses included). Which of the following packages, A or B, would you choose in each scenario?