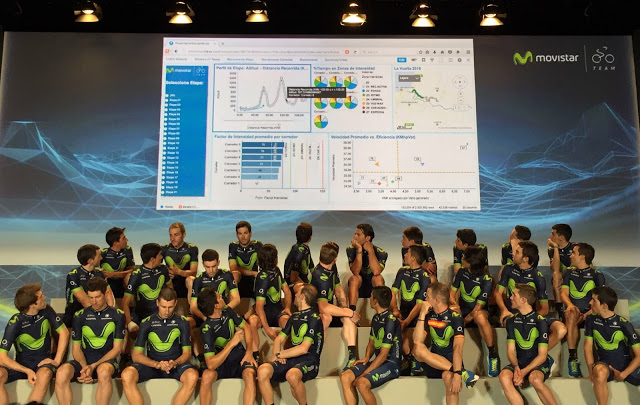 The best cyclists, the best technical body, the best strategy and Big Data. How will the Movistar Team continue being the best in 2017?   29th of August 2016 seen the 10th edition of the Tour of Spain moved to the lakes of Covadonga. A 40km stretch called “el Mirador del Fito” a top level port with which the Movistar team will be taking with force, trying to avoid letting one of the other teams run away with the title. The first surprise came jut 7km into the race when Alberto Contador gave Nairo Quintana a run for his money as they were battling it out for the lead, when finally 3.6km before the end Nairo managed to push ahead to to take the lead.

This is the beauty of cycling, it is led by some of the most physically fit sportsmen, with high endurance who are strategically coordinated so that all these factors can lead to victory. Behind these sportsmen exist a dedicated technical team who deal with planning their training slots, recovery and their physical and mental health. All this hard work that goes in behind the scenes is definitely work it when we witness scenes like the race between Contador and Quintana.

In 2017, the Movistar team (directed by Eusebio Unzué) will be returning with Nairo Quintana and Alejandro Valverde as the leaders of a panel that mixes youth and experience (10 of the cyclists are younger than 26). We want as much information as we can get, we want our cyclists to use the data we generate not only for training but also during the actual race so they can improve individually and as a team. To give ourselves an idea of the sheer quantity of data, in the Tour of Spain alone we were able to track more than 25 million movements generated by the 8 cyclists from the team. The Big Data revolution has also been put to use by cycling and at LUCA we went to put this information to practice.

The biggest cycling competitions like the Tour of Spain, Italy and France are all carried out across hundreds of kilometres, hours of hard work and when it comes to the finish line it’s only really a few seconds that separate first and second place. Taking this into account with a sport as competitive and technical as professional cycling it is key that we use as whatever tools we can to create tighter margins for victory.

Video: Chema Alonso, the CDO of Telefónica giving a brief speech at the presentation to the Movistar Team.

According to this Harvard Business Review article, it only takes a mere 1% improvement with the determined variables to impact a race. This was the case for the UK Olympic cycling record. This can vary from carefully analysing all aspects that can effect the cyclists performance (from how aerodynamic their helmet is, to their journey time from the olympic village to the track.) and this can make all the difference in producing a win for the team. LUCA’s input will be applying the power of Big Data and the science behind said data to identify areas in which the team can update and improve their performance.

During the 2017 Movistar Team presentation, Chema Alonso, Chief Data Officer at Telefónica presented the findings alongside Mikel Zabala (professor at Granada university) who has a wealth of experience both professionally and academically in Sport Science who is also part of the technical team of trainers for the cyclists.   Mikel uses the computer generated data for both their off track training and to improve their track capabilities, like testing their strength or nutrition levels. This data allow Mikel to generate a series of complex variables and mathematical models that lead to the analysis of efficiency and wear and tear of each cyclist. This information is critical in terms of planning and personalization for each training plan. The end goal is to optimize the physical and mental perfomance of the cyclist throughout the race so that they can perform well as a team but also effectively recover.

To analyse the data taken from each bike´s computer we can find free and compatible programmes like GoldenCheetah or TrainingPeaks that work with most data formats. Both of these platforms provide valuable and technical information however, we want to take the analysis further. Creating an analysis tool adapted to the specific needs of the team that uses the most up to date statistic and technical Machine Learning models. This allows us give unique information to further push the team ahead of their competition. Some of this work that we are developing includes:

2017 is there for the taking, so lets cycle towards victory!

LUCA at #HackForGood5 LUCA events for your diary