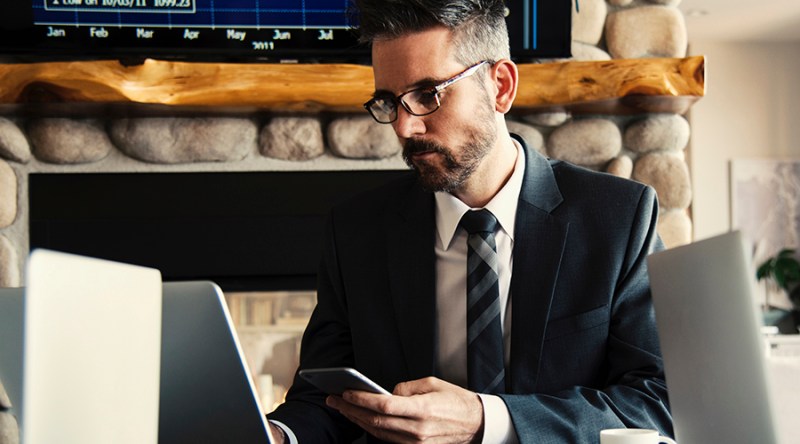 07:00 am. Daniel opens his eyes for the first time while he’s listening to his favourite song and he goes back to sleep with a big smile. “Only five minutes more”, he thinks to himself. With the purchase of his smart mattress he has recovered deep sleep and can consult the details of his sleeping quality, back position, and temperature. In addition, he’s calm because he knows Internet of Things, which makes his home a connected place, will make him arrive punctual one more day after three marvelous months. With the difficulty of waking up that has chased him for ages finally gone, now he can rarely remember those days in which the alarm went on and on. His wearable vibrates and he uses the phone to lift up the blinds which help him and his wife to wake up peacefully.

07:05. ¡Clonk! The coffee capsule falls into the coffee pot. It’s his second alarm, much more subtle but what opens his eyes this time is the smell of fresh coffee. He is calm because he knows how many spare capsules of his favorite coffee flavor are left; the coffee maker warned him about it, only a few remain, he will need to buy more. Now he only has to worry about deciding if the toast he’s going to make will be salty or sweet.

07:30. Taking advantage of the little time he has until the children wake up, he goes to walk take his dog, Cronos, for a walk. Both go perfectly equipped, Daniel is wearing his connected shoes that measure the steps he takes and he can control Cronos exercise by using the wellness app. Another task that the Internet of Things has facilitated is that when Cronos hides behind the bushes, Daniel can find him easily by using the tracker. That scares him more because he knows that Cronos has slept perfectly and his mood is excellent. Today it’s time to run!

07:45. Back home he hears a second clonck! Yes, the coffee maker also warned him that the children’s hot chocolate was running low and he includes it in the shopping list. Another task that has become much easier with smart appliances, because thanks to the fridge warnings about lack of food or expirations dates he can make more efficient purchases. Also, smart appliances have changed their habits, which have become much healthier, both in food and exercise. It’s time to wake up little beasts. Meanwhile, IoT is not helping Daniel and Candela in their clothing, but hopes that breakfast will appease them.

7:50. Candela leaves Daniel in the kids room and she goes to the shower. The sensors detect that is Candela, so they start to prepare the water in a 37 degrees temperature, perfect for her. The shower has also adjusted the pressure of the water. This is her favorite moment of the day.

8:10. Daniel’s wife says goodbye to her family. Like him, she has to carry the kids to school in the family car. She has chosen a nearby car of the neighborhood through an app of car-sharing and she booked it to go to the office. This decision has helped a lot with the organization of her chaotic mornings and she can do it easily from the smartwatch. Once she gets to the car she only has to put de seatbelt on. Her track-record is loaded thanks to the connectivity of the wearables; the mirrors and the seat are perfectly adapted for her comfort. She doesn’t even have to touch the radio or the temperature; it has been adjusted automatically with her profile. In the meantime, Daniel and the kids are preparing the schoolbags and filling the dishwasher.

8:30. “I am getting out through the door!” Is Daniel’s battle cry every morning to make his kids to run to the car. The access to the garage is already open. The vehicle detects the keys in Daniel’s pocket so it opens inviting the kids to enter, fasten the seatbelt, and go to school.

8:31. Daniel opens the garage door with an app of his mobile. Once the door is closed, the security system detects that there is nobody at home (except Cronos) and puts on the alarm, warning Daniel with a text message. When he receives it, he calms down. He gives the mobile to his kids to let them have a good time and choose the music on the way to school. “Music is said to calm beasts”, thinks the dad while he looks how the temperature is automatically regulated because the wearable has said that Daniel is a little cold. The three of them are travelling better, even though it’s to the school. Once there Daniel is at peace because his kids’ schoolbags have a locator.

9:00. He has arrived at Telefónica IoT just in time. The GPS has offered him the best route to get to the office, avoiding an unexpected construction site in the usual route. So there is a double purpose: avoid the traffic jam and learn a new way to go to work. In addition, the traffic lights are slowly including the technology of the Internet of Things, so the GPS adaptation to the traffic and the pedestrians is noticeable in the daily journeys. Driving every morning is safer and going to school or to the office is much more efficient. Daniel goes in to work dreaming about the day when the cars “speak” between them, creating an even better driving experience.

The future of Internet of ThingsSafer, but not immune