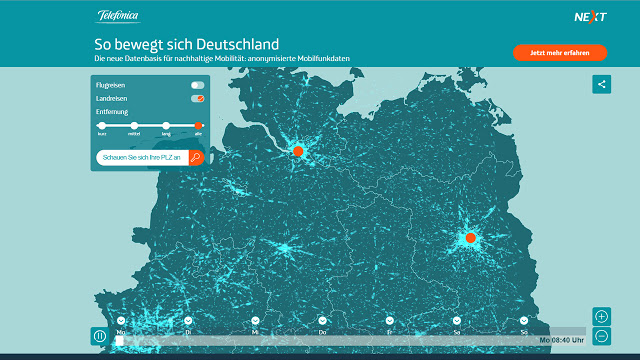 Our colleagues in Telefonica NEXT have created, using mobility data, data analysis and big data, an interactive map that lets you visualize nationwide traffic flows. Cities, transport companies and other interest parties can obtain interesting insights on topics like commuter behaviour and morning departure times from anonymised mobile network data.
If you want to discover how Telefonica NEXT has brought life to the findings for mobility and transport planning in Hamburg, Berlin and Munich, continue reading this post (originally published in Telefónica NEXT web).
Mobility data, data analysis, big data – these terms are all rather abstract. With “So bewegt sich Deutschland” (How Germany moves), Telefónica NEXT has created an interactive map that takes the data and uses it to visualise nationwide traffic flows. The aim is to bring to life the findings for mobility and transport planning in Germany that cities, transport companies and other interest parties can obtain from anonymised mobile network data. Among other things, it includes regional insights on topics such as commuter behaviour and morning departure times for Hamburg, Berlin and Munich.
In Telefónica Deutschland’s normal operation, mobile network data is generated by over 48 million accesses. This happens as mobile phones communicate with mobile cell sites when using the internet or making calls. Telefónica Deutschland anonymises the around five billion data points generated every day using a three-level TÜV-certified process so that they can no longer be assigned to individual people.
The Telefónica Deutschland subsidiary analyses this data in order to learn about movement patterns in Germany, thereby delivering significant value added for areas such as transport planning. “Big data is an abstract topic. With ‘So bewegt sich Deutschland’, we have brought our anonymised data flows to life for the first time,” explains Jens Lappoehn, Managing Director for Advanced Data Analytics at Telefónica NEXT. “Our data visualisation illustrates what the Fraunhofer Institute for Industrial Engineering confirmed a year ago:

Early risers and commuters in Germany

According to calculations, 161 million journeys of more than two kilometres are taken on an average weekday in Germany. On the website, these movement flows are presented across an average week in an interactive graphic. Each of the moving droplets represents a sufficiently large group of travellers – this is relevant for data protection as well as for statistical purposes.
Telefónica NEXT also identifies when each of the German regions starts its day. The average departure time for Germany as a whole is half past seven in the morning. The data shows that people in the eastern half of the country down to Bavaria leave the house earlier than those in the west of the country. In terms of the individual federal states, people in Brandenburg and Saxony-Anhalt have the earliest average departure time at 6:56 a.m.
Residents of Mecklenburg-Western Pomerania have the longest average morning journey at 29.6 kilometres. The shortest average journey is recorded in Berlin (6.7 kilometres). Users of the website can enter their own postcode and see how early their neighbourhood starts the day. Different postcode areas can also be compared.
Another interesting aspect illustrated by the site is the different sizes of the catchment areas for major German cities. While people commute into Munich from a surrounding area that is clearly defined, those commuting into Hamburg travel far greater distances, including from regions such as Mecklenburg, Prignitz and Western Pomerania. The average Hamburg commuter covers a distance of 28.9 kilometres to reach their workplace.
These are just a few examples of how anonymised mobile network data can be used in transport planning, thereby benefiting those in charge of public transportation and urban planning as well as developers of new forms of mobility. Telefónica NEXT’s data pool is already being used in numerous projects. These include the “ProTrain” project for the optimisation of regional transport capacities in Berlin-Brandenburg, which is supported by the German Federal Ministry of Transport and Digital Infrastructure.

How the data is created

Based on anonymised mobile network data from Telefónica Deutschland, Telefónica NEXT prepared a comprehensive origin-destination matrix for the whole of Germany. Information on the origin and destination of journeys of more than two kilometres within Germany was recorded in March 2017. Telefónica NEXT then evaluated the anonymised data for each hour and each postcode. All of the data takes the form of extrapolated values, i.e. they are projected for the entire German population.
Telefónica NEXT also worked out the respective means of transport. A distinction was made between air transportation and land transportation (road and rail). The underlying algorithm can identify flights from values such as journey speed and duration. Further details of the methodology can be found here.