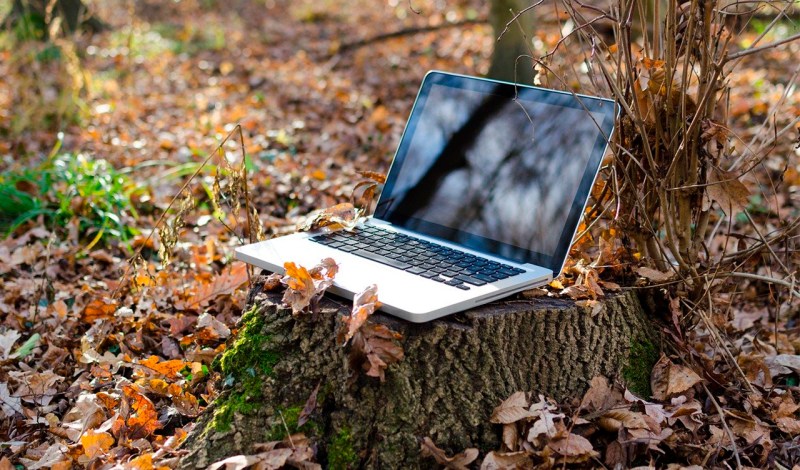 Do you have any idea how the Internet affects the environment? According to World Bank data, 48.5% of the world’s population was already connected to the Internet in 2017 (of course very unevenly, from 1% in countries like Eritrea, to 98% in the most developed countries). And the number is growing steadily. So much so, that since January 2018, the number of people who have connected to the Internet for the first time has increased by 9%, reaching 4.39 billion users in 2019, Let’s see how this impact is generated and what we can do to reduce it as much as possible.

One of the most easily identifiable consequences of this exponential growth is the parallel generation of large volumes of data. In fact, the level of data generated each week worldwide exceeds that accumulated in the last 1000 years of human history.

The growing demand for data exchange and the volume of information stored in the cloud has raised the need to build ever-larger storage and processing spaces. These facilities, which operate 24 hours a day, 7 days a week, and under very specific temperature and humidity conditions, can consume more energy than large countries. And their number is growing every day.

In fact, the company Cisco Systems, estimates that the number of hyperscale data centers in the world will increase from 259 in 2015 to 485 by 2020

In addition to the implications derived from the unstoppable growth of data, there are others that could pass unnoticed.

Talking about devices, on one hand, we must take into account the impact of their manufacture, both in terms of the use of very specific raw materials and energy resources, as well as the way in which we dispose of them when they are no longer useful (technological waste). Moreover, other “contributions” related to transportation, logistics, etc. should be added.

Can the impact of internet use on our environment be somehow measured? The answer is “yes”, and to do so, what we do is to quantify its carbon footprint.

What is the carbon footprint of the Internet?

The carbon footprint is a way of quantifying the greenhouse gas emissions released into the atmosphere as a result of a given activity. It is used as a tool to raise awareness of the impact of each activity on global warming.

And yes, it is possible to calculate the carbon footprint generated by each email sent (a high percentage of which is unwanted), each tweet, each Google search, each photo uploaded to a social network…

This revealed that data centers are one of the most polluting industries in the world. So much so that, if we do nothing to prevent it, the impact of ICT industries on the generation of greenhouse gases could reach values equivalent to 50% of the impact generated by the use of fossil fuels in the transport sector by 2040.

Information and communication technology (ICT) equipment and services consume more than 8% of the EU’s electrical energy and produce around 4% of its CO2 emissions. These figures could double by 2020.

That is why, despite being a great challenge, the EU has set out a voluntary Code of Conduct to improve the efficiency of data centers and reduce energy consumption since 2008, which many companies have already joined.

How can we reduce the effect of ICT on global warming?

As individuals, we can take actions such as unsubscribing from newsletters that do not interest us, avoiding what is known as “latent pollution”, due to the unnecessary storage of e-mails. We can also reduce our queries to Google, and avoid spending hours watching videos of kittens on Youtube or connected to social networks.

In short, making responsible use of the Internet, being aware that each of these actions is a drop in the ocean, yes, but it is a sum and follows the overall balance, and we are many millions of people who “play our part”.

In 2017, Greenpeace USA produced a report “Clicking Clean: Who’s Winning the Race to Create a Green Internet 2017?” that analyzed the energy footprints of the largest data centers and nearly 70 of the world’s most popular sites and apps and explained the situation in a didactic video:

He urged the major Internet companies to stop using outdated and polluting “dirty” energies, and to start covering their energy needs 100% with renewable energies such as hydro and wind sources.

As a result of this interest, green data centers emerged, which are those that adopt sustainable technological solutions that contribute to improving energy efficiency and, therefore, to economic and environmental sustainability.

The environmental conditions in some countries such as Ireland, Norway, Iceland, Sweden, etc. have turned them into true “superpowers” of green data centers.

For example, in Norway, energy-efficient and sustainable data centers are built next to fjords. They use cooling systems that carry water, at 8ºC, from the fjord to the station without using electrical energy, only with the help of gravity, and without the need to use refrigerant gases, which ensures that it is a sustainable plant with zero emissions.

In other cases, data centers are built underground, such as the Lefdal Mine Datacenter, which, located in a former mine at a depth of more than 600 meters, obtains its energy supply from a nearby hydroelectric power station; or even underwater, such as Microsoft’s Nactik project in the Shetland Islands.

The information and communication technologies (ICT) sector must be a pioneer in the adoption of sustainable technological solutions that contribute to improving energy efficiency and, therefore, to economic and environmental sustainability.

One of the main advances towards this sustainability is the evolution of traditional data centers towards “hyperscale” data centers. These centers achieve significant savings in energy consumption by using large arrays of commodity servers designed for specific tasks instead of conventional servers, and by adopting the latest advances in cooling.

On the other hand, companies such as Google have achieved significant reductions in the energy consumption of their data centers by optimizing the use of their cooling systems using artificial intelligence algorithms.

Finally, we cannot forget that many start-ups and large companies such as Intel and AMD are developing semiconductors to manufacture new microchips based on technologies such as photonics to power neural networks and other artificial intelligence tools that consume much less energy.

In short, while technological progress poses significant challenges to environmental conservation, at the same time, every day, it offers new solutions.

Can Artificial Intelligence understand emotions?AI of Things(I): Multiplying the value of connected things