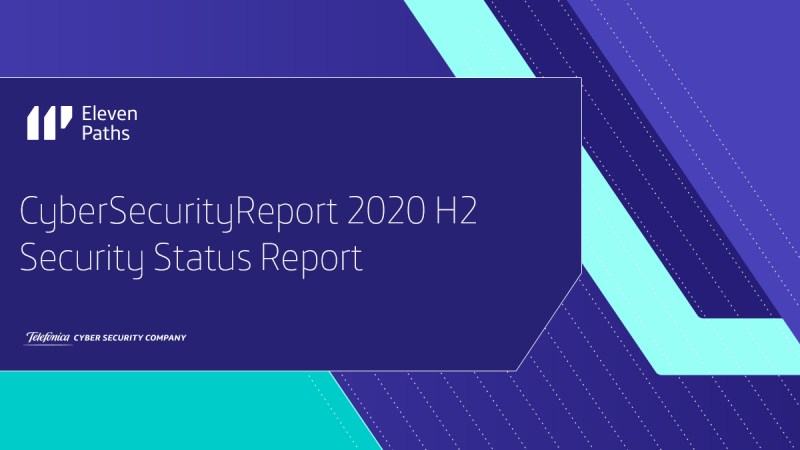 There are many reports on security trends and summaries, but at ElevenPaths we want to make a difference. From the Innovation and Laboratory team, we have just launched our own cyber security report that summarises the highlights of the second half of 2020. Its philosophy is to offer a global, accurate and useful overview of the most relevant data and facts about cyber security, and it is designed to be consumed by both professionals and amateurs in a simple and visually appealing way.

The purpose of this report is to summarise the cyber security information of the last few months, taking a perspective that covers most aspects of cyber security, in order to help the reader understand the risks of the current situation.

The information gathered is largely based on the compilation and synthesis of internal data, cross-checked with public information from sources we consider to be of high quality. The following are some of the points that are important to us.

Regarding Microsoft, the total number of flaws discovered and fixed is more than 600 during this half-year, the same as the previous one. We understand that most of the non-credited flaws may come from vulnerabilities found in 0-days or other circumstances where the author is not known and has not been reported anonymously. In these cases, Microsoft does not credit anyone in particular. This difference between credited and ” non-credited ” vulnerabilities, which is not the same as anonymous, is reflected in the following chart:

Compared to the previous half-year, the data on who discovers vulnerabilities at Microsoft looks very different. The long queue of “others” leads the list. This means that they are discovered by researchers with less than 5 cumulative flaws. The ZDI initiative remains (increasingly) the favourite formula for researchers. This trimester, Zhiniang Peng is a very relevant actor with 66 flaws. It is also striking that Qihoo, responsible for hundreds of flaws discovered regularly in previous years, has completely disappeared from the list this semester.

Interesting comparison with the previous semester:

2020 has closed with 187 vulnerabilities patched in the iOS operating system, 37 of which are considered high-risk, with the possibility of executing arbitrary code. Some of them affect the kernel of the system itself.

On Android, this was the second year with the highest number of reported vulnerabilities.

With respect to this year’s Apple transparency report, there are some interesting facts. For example, these requests occur when law enforcement agencies act on behalf of clients who require assistance related to fraudulent activity involving credit cards or gift cards that have been used to purchase Apple products. In this sense, Spain is one of the most active countries requesting data from the company.

Regarding the number of vulnerabilities per manufacturer, Microsoft, Google and Oracle continue to lead. However, this number has to be seen in the perspective of criticality, number of products, etc.

In mobile phone security, the number of IOS vulnerabilities continues to trend upwards since the downturn in 2018. For Android, 2020 was the second year with the most reported vulnerabilities, after the historic 2017.

In comparison with last semester, CWE-89 based on SQL injection, and CWE-287, which explains poor authentication, sneak into the list. These are problems that have been around for years and never quite disappear from the list of the most serious known vulnerabilities. The top of the list remains intact compared to the first half of the year.

APT groups, meanwhile, have not stopped their activity. Kimsuky (Aka “Velvet Chollima”) and Fancy Bear are still active, while the OceanLotus Group has been unmasked by Facebook.

In a half-year period where again almost every month Microsoft has exceeded 100 vulnerabilities fixed, this time Qihoo does not appear in the list of manufacturers that have found the most flaws. ZDI is still the favourite formula for communicating (and rewarding) serious flaws.