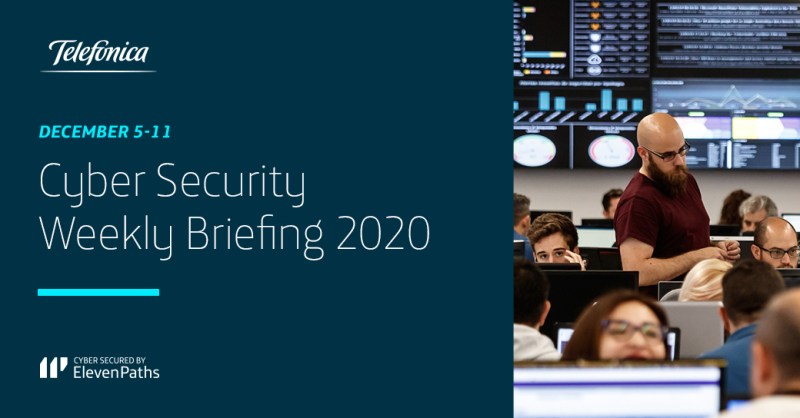 On December 8, Microsoft published its monthly security update newsletter, which this time includes patches for 58 vulnerabilities and an advisory for various Microsoft products. Nine of the fixed vulnerabilities are critical, 48 are of significant severity and two are of moderate risk. Among the total number of patches published, 22 updates stand out which refer to remote code execution (RCE) failures, affecting products such as Exchange Server or SharePoint, among others. Among the CERs, the one affecting Hyper-V (CVE-2020-17095) is noteworthy, as it is exploitable through a malicious SMB package and could compromise the security of virtual machines created with the application.

Exploitation of Vulnerabilities by Russian Threat Agents in Virtualized Environments

The National Security Agency (NSA) has issued a cyber security advisory detailing how Russian threat agents may have exploited a command injection vulnerability in VMware products (CVE-2020-4006), thereby gaining access to protected data and affecting systems. Exploiting this vulnerability requires the attacker to have access to the device’s management interface, which would allow him to forge credentials by sending apparently authentic requests with SAML (Security Assetion Markup Language) and thus gain access to protected data. Vulnerable products include VMware Workspace One Access, Access Connector, Identity Manager and Identity Manager Connector. The NSA recommends that NSS, DoD and DIB system administrators apply the patch issued by the supplier as soon as possible. If an immediate patch is not possible, system administrators should apply the following mitigations: detection of indicators in the activity logs, deactivation of the configuration service, correct configuration of authentication measures on servers and services, as well as configuration of unique and strong passwords.

EMA, the European regulatory body in charge of approving vaccines against COVID-19, has announced that it has fallen victim to a cyber-attack and has begun an investigation to clarify the violation of its systems. In this sense, the companies BioNTech and Pfizer have confirmed the detection of unauthorized access to confidential documentation related to the vaccine they have developed. The pharmaceutical company Sinopharm International Corporation, whose vaccine for COVID-19 is currently in phase three of the clinical analyses, has also been impersonated for the distribution of a new version of the Zebrocy malware, written in Go. This malware has been linked primarily to government institutions and commercial organizations involved in foreign affairs. In recent months, we have been seeing pharmaceutical companies developing vaccines against COVID-19 being compromised by state-backed up threat agents (Fancy Bear APT28, Lazarus Group or Cerium, among others). Most of these attacks begin with phishing campaigns with malicious files attached, aimed at collecting credentials and then compromising the systems of these companies.

On December 8, the operators of Conti ransomware made public on its blog in the Dark Web the compromise of the financial sector company Total System Services (TSYS), publishing 15% of the information stolen. The company has confirmed that they stopped the attack as soon as they became aware of it, determining that no interruptions in the payment service would have been generated and that cards data would not have been extracted. Fabian Wosar, CEO of the IT security company Emsisoft, says that Conti operators only post the information on their blog when, having urged the victim to make the payment, the victim refuses. It is estimated that the group of cybercriminals behind the Conti compromise could be the same ones that operate Ryuk, who were linked by the cybersecurity company CrowdStrike to the WIZARD SPIDER group from Russia.