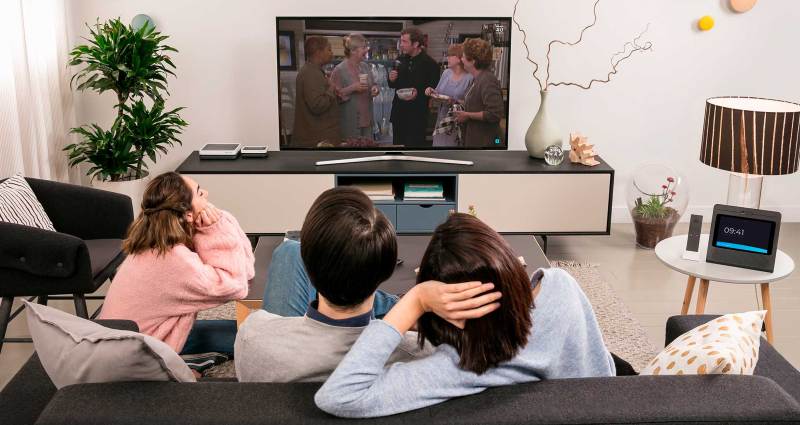 At the 2018 edition of MWC, we announced that we were working on Movistar Home, a device aimed at reinventing the home incorporating Aura, Telefónica’s artificial intelligence, for its launch at the end of last year. This launch formed part of a company strategy based on bringing Telefónica’s artificial intelligence to users’ homes, using Movistar Home as a launching pad and converting the ecosystem of Telefónica’s home-installed devices into a “super computer”, which we have named Home as a Computer (HaaC).

At first, we focused on Telefónica’s core home services, Wi-Fi connectivity, television and communications, although we also anticipated the direction we were going to take with this project, incorporating areas such as family games and smart homes.
From the beginning, we were clear that the device would have to have two essential features:  a touch screen and the incorporation of natural language in its interaction with our users. This would allow us to develop a key device when it comes to enhancing access to digital services from the home.

Services and capabilities of Movistar Home

As well as the enhancement of these services, the hardware and software capacities of the device also enable us to provide our homes with:

– Second Screen: A second screen that enhances the user experience when enjoying content played on the main television screen, from supplementing what’s being viewed with information to creating interactive and smart advertising models which connect us to what is known as TV-Commerce.

– Hyper-Edge Computing: From the beginning, Movistar Home was designed with the ability to integrate micro-services. This would complement Telefónica’s Edge Computing strategy with a device that could help us to improve the implementation of services which require a minimum latency, such as gaming.

– Access to services from a third-party ecosystem: The device was created with the aim of enabling the opening up of the home ecosystem to services from third parties, which would provide other companies the opportunity to enhance access to their services from the home, as we have done with Telefónica’s services.

Its location in the living room, the heart of family life, facilitates interaction with Movistar+ content on the television and with calls and video calls. This is why Movistar Home has these elements built-in from the very beginning.

Among the technical characteristics we wanted the device to have, the most important is privacy, thanks to the ability to cover the webcam and a button to turn off the microphone at a hardware level, and the “always on” feature, which allows the device to be constantly on in order to encourage the user to use it and in order to not worry about whether or not it has battery life when they need to use it.