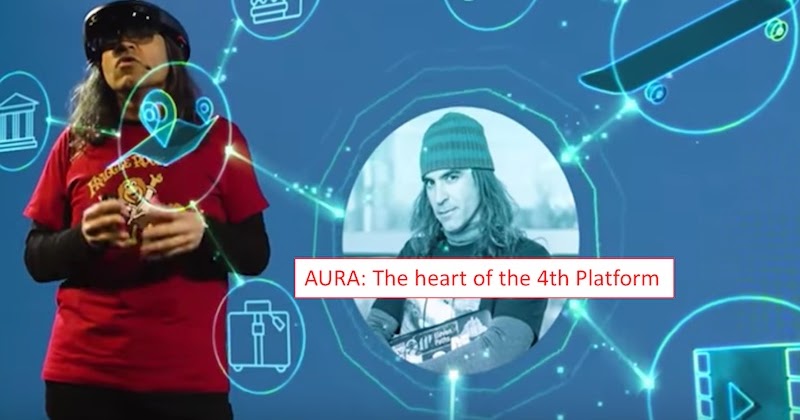 When I became Chief Data Officer at Telefónica, I was faced with new challenges and possibilities as I began carrying out this new role in the company. One of these first steps was the building of something which we internally called the Fourth Platform. To explain this new project, I always use the famous “Daisy strategy”, which explains how we intended to normalise data in a URM model in order to build standardised technology across the group. Normalised data encouraged by use cases which would get the best out of Machine Learning and Data Scientists. What’s more, we had the task of launching the Big Data & Artificial Intelligence unit for the Telefónica group: LUCA. This was the first step towards the birth of Aura and its presentation at Microsoft.

The whole project concerning the Fourth Platform which was about to be born required building a complete system that had the users’ data plus their Personal Data Spaces, with their generated data and their insights, which would allow a PIMS (Personal Information Management System) to be created which would support GDPR starting with the design, with the option of data portability, consent management, and which required that every interaction could be done with Natural Language using Cognitive Services and AI models. And that is how Y.O.T. (You On Telefónica) was born. The name Aura was yet to take hold. But that was it, essentially. I put all this onto a drawing in which you could see that we needed APIs, ETL processes, to normalise data with URM, create a governance framework, etc.

In order to be able to proceed with the creation of LUCA as well as of the Fourth Platform, I rearranged the CDO unit with the cross-sectoral Brand Experience and CTO teams with the teams that did technology with Big Data and Machine Learning which were revenue generators in LUCA  and those who did data jobs within the Fourth Platform. All of this in tandem with ElevenPaths managing the company’s cybersecurity.

The trip to Microsoft Corporation in August 2016

In August 2016 a group of colleagues from Telefónica and I travelled to Silicon Valley and Seattle to find out how the world of technology was moving that summer. Those trips to the USA helped us a lot. In a week we learned, we defined and we drew up future plans, building the foundations on which all the architecture of the Fourth Platform was to be based.

One of the companies we visited decided to invest in us and to help us. It all came out of a meeting that I will never forget because of what it meant for us. It was a meeting in Redmond, in Microsoft’s general headquarters, with Satya Nadella and his team, which led to the collaboration we needed to build Aura. At the 2015 Mobile World Congress, we had dinner with Satya Nadella. That night we talked about technology, data, what the future held for A.I. and enhanced reality, mobile devices and the telecommunications industry.

At the meeting we had in August 2016, we were accompanied by José María, José Cerdán – who not many people know is one of the intellectual fathers of LUCA and who is responsible for its name as well as the fact that we made it -, the incredible and incomparable Guenia who always provides the innovation to whatever we’re doing, and myself, who had to talk about what we were going to do. The Microsoft account team also came from Spain, led by Pilar López, who put her heart and soul into this project; Juan Troytiño, who helped us to pull out all the stops to maintain the relationship between the two companies despite the difficulties that two such large companies can often encounter; and David Cervigón, a friend and Cloud architect, with a unique vision. He knew where and how they could help us.

Company heavyweights from Microsoft Corp came, but Satya Nadella himself was to the fore, along with Peggy Johnson, Lili Cheng and the great Gurpreet Pall. To give you an idea, Peggy supported us during the launch of the 2017 MWC, and Gurpreet Pall in 2018. And everything happened at that meeting I’m telling you about in August 2016. In that moment, I had 10 minutes to talk in front of Sadya Nadella and tell him about what we were going to do, when we were going to do it and what we needed from Microsoft.

What did I say to Satya Nadella?

I explained to him what we were going to build in the same way I told my colleagues, with my famous daisy diagram. I drew it on a white board in the room and I explained each thing. I didn’t bring a Power Point presentation or a video to help me, I just drew and told him about what we were intending to launch at Telefónica. I explained the technological parts, the abstraction layers, the data normalisation, the part about the bot, the part about the cognitive services, where the insights were going to be managed, etc.

He liked the idea and believed that we would do it, so Satya Nadella told us we could count on them for the 2017 MWC. Peggy Johnson helped us with anything we needed along the way, Pilar López called up her engineers so they could lend us a hand, Juan Troytiño helped us with the HoloLens and David Cervigón helped us with LUIS, Bot Framework, etc.

As a result of this first contact, we met up again in August 2017 and August 2018 for more meetings, but on different topics. In the last two meetings we talked about Movistar Home, Privacy, Data Economy, Network Tokenisation, Contact Centres, BlockChain, Quantum Computing… Out of all of this, one phrase that Satya Nadella said to us in the last meeting has stayed with me:
“You guys say you are going to do something, and you do it” … And for me, everything began with the drawing I used to explain Aura to Satya Nadella.

Movistar Home, the reinvention of the home thanks to Artificial IntelligenceHome as a Computer, a new prospect for connected homes