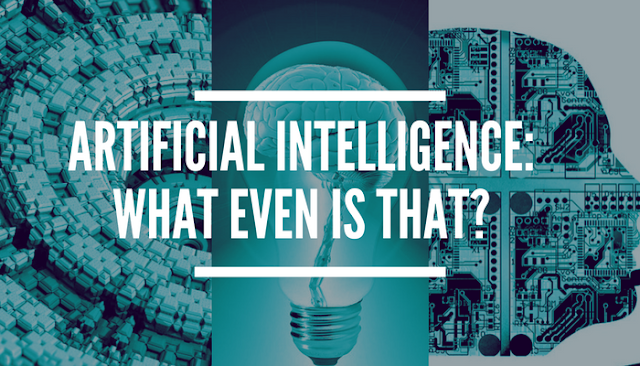 Artificial Intelligence (AI) is the hottest topic out there at the moment, and often it is merely associated with chatbots such as Siri or other cognitive programs such as Watson. However, AI is much broader than just that. To understand what these systems mean for Artificial Intelligence, it is important to understand the “AI basics”, which are often lost in the midst of AI hype out there at the moment. By understanding these fundamental principles, you will be able to make your own judgment on what you read or hear about AI.
This post is the first of a series of three posts, each of which discuss fundamental concepts of AI. In this first post, we will discuss some definitions of AI, and explain what the sub-fields of AI are.

What are the most common definitions of AI?

So, first of all, how does Google (one of the kings of AI) define Artificial Intelligence?

There are many definitions of AI available online, but all of them refer to the same idea of machine intelligence, however, they differ in where they put the emphasis which is what we have analysed below (an overview of these definitions can be found here).

All definitions, of course, emphasise the presence of machines which are capable of performing tasks which normally require human intelligence. For example, Nillson and Minsky define AI in the following ways:
Other definitions put emphasis on a temporary dimension, such as that of Rich & Knight and Michie:
The above definitions portray AI as a moving target making computers perform things that, at the moment, people do better. 40 years ago imagining that a computer could beat the world champion of chess was considered AI. However, today, this is considered normal. The same goes for speech recognition; today we have it on our mobile phone, but 40 years ago it seemed impossible to most.
On the other hand, other definitions highlight the role of AI as a tool to understand human thinking. Here we enter into the territory of Cognitive Science, which is currently being popularized through the term Cognitive Computing (mainly by IBM’s Watson).
Some however take much a more concise and less scientific approach with definitions such as:

From all of these definitions, the important points to remember are:

What are the sub areas of AI?

Looking at the introductory table of content of any AI textbook will quickly reveal what are considered to be the sub-fields of AI, and there is ample consensus that the following areas definitely belong to it: Reasoning, Knowledge Representation, Planning, Learning, Natural Language Processing (communication), Perception and the Ability to Move and Manipulate objects. But, what does it mean for a computer to manifest those tasks?
In this first post (of three), we have explained some key notions about Artificial Intelligence. If you couldn’t do so before, you will now be able to read AI publications a bit differently.  In the next post, we will elaborate on the question of how intelligent AI can become. Stay tuned!
Telefónica Mannequin ChallengeInternational call traffic may tell you more than first thought