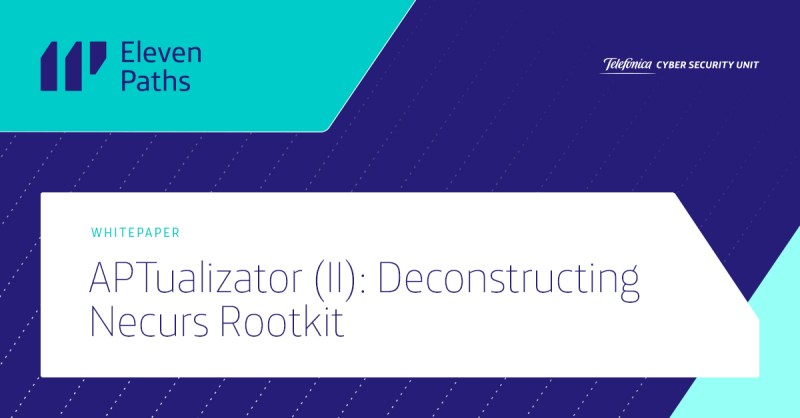 This report has been drafted by Roberto Santos and Javier Rascón from the CSIRT-SCC (Security Cyberoperations Center) Research Team, in collaboration with ElevenPaths.

At the end of June 2019, a big Spanish company was attacked and thousands of their computers were impacted. Such was the size of the attack that we were motivated to begin this investigation. In July 2019, we wrote an article on this issue: APTualizador (I).

This second report will be focused on the technical aspects of the rootkit found.

As a result of the investigation we identified this rootkit as a development of Necurs. This botnet (appeared in 2012) is one of the most persistent and largest in the world and it is estimated that it is made up of 6 million zombie computers −target computers around the world and controlled by attackers remotely.

This report will consider in depth and from a technical perspective how malware manages to hide in the computer, analyzing the tools used and the code that controls this behavior. On the other hand, the communication protocol used is also analyzed. This has been modified since the first versions and IOCTL commands are no longer used. Instead, it is now based on reading / writing on Windows registry, turning the registry into a local covert channel.

Our investigation ends with the release of two tools, NeCure and NeCsists, that allow detecting malware and disinfecting the machine. These tools have been developed after finding the means to exploit the techniques used by the attackers themselves, thanks to the study and analysis using reverse engineering techniques.

Through this report, we have helped update the state of the art on the evolution of one of the most sophisticated rootkits so far.