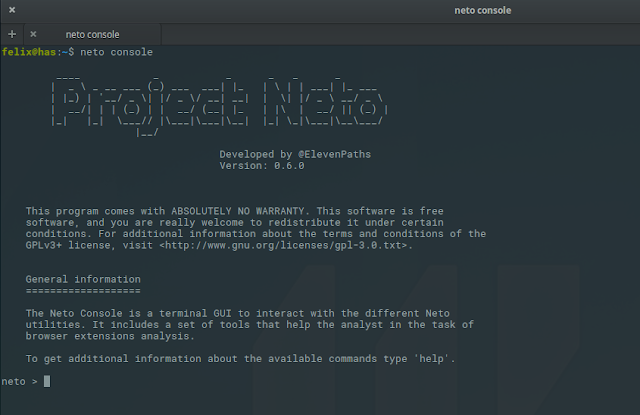 Fifteen days ago we published the first version of Neto, our extensions analyzer in Github. It was published under a free license, also during this time we have worked on a series of features which allow the analysts to have a better interaction with each one of the tool’s uses, in addition to improving their settings. In this post we will see some of the new changes which we have included in this version whilst highlighting their interactive interface.
The main new changes to version 0.6

In this second release we will include some of the features which we consider to be relevant:

The simplest way of installing the tool is with the pip command:
Those who have already downloaded the previous version, will have to update it by adding the previous --upgrade command:
The GNU/Linux systems’ command can execute it either with an administrator’s profile or even with a sudo if we are not administrators and we do not have privileges to add it, use --'user'in order to install it only for the actual user.
The interactive console
As we previously commented upon, the main change of this version has been the addition of the interactive Neto console. Within the commands interface which we have included, we wanted to get closer to some of the Neto features in an easier way, in order to explore the extensions. In order to launch it from the commands line we will utilize neto console, which will open an interactive interface. 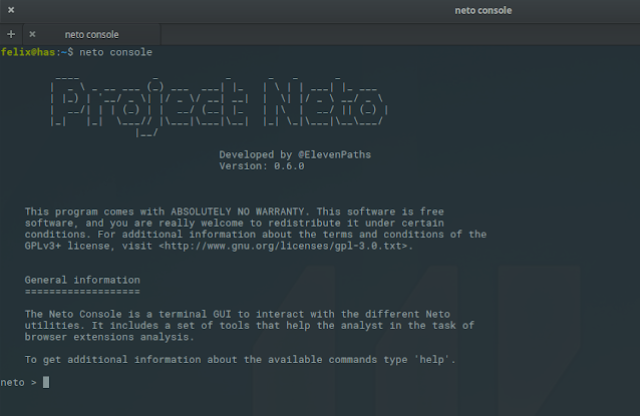 From there, at any moment we can support it by using the help command, in order to see which options we have.

So far, we have included 13 different commands with distinct uses, which we will order below in alphabetical order. Where it has been possible, we have implemented the autocomplete option. In whichever case, if we have doubts about any of their functions, we can use the 'help' command to see the available help and some examples of how to use it: 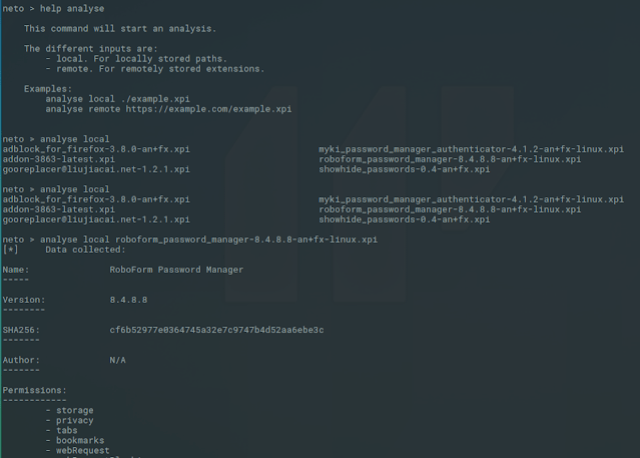 Following this, we have provided a small demonstration video below of how the interface console functions with Neto Console, so that it gives you the idea of how to use it.
In the future…

Although the state of the Neto development is still clearly a work in progress, our Innovation Laboratory at ElevenPaths wants to continue enhancing the tool’s characteristics. In the next few weeks we will talk about how to develop new analysis plugins in order to add new characteristics which we will find in the extensions, and in some cases in those in which the tool can be helpful in analyzing the extension’s characteristics at a glance. Meanwhile, in order to continue improving little by little you can always let us know any doubts which you may have in respect to how it functions and also any issues within the Github project. Any feedback will be well received.