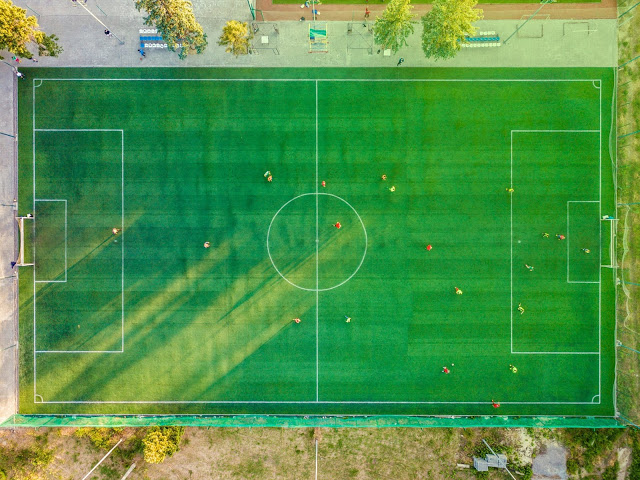 As we already know, AI technologies are being used both within sports and to create new sports, but these tend to be very similar to sports which already exist with slight adjustments to the rulebook.


The design agency AKQA has taken it upon itself to design a completely new and innovative sport with help from an AI built by them…this sport is called Speedgate!


The rules of this game are relatively simple. It is a game of 3 seven-minute intervals with 6 players in each team which compete on a field consisting of 3 open-ended gates.

In order to score, players must kick the ball through a central gate, which they may not pass through. Having done this, they may then proceed to score 2 points by putting the ball through either of the end gates. An extra point can be scored if a teammate catches the ball and kicks it back through the gate.

As can be seen by the name Speedgate, this game is supposed to be played at a fast pace and as such, the ball cannot be still for more than 3 seconds or it is turned over to the other team.


As AKQA didn’t want to conform to the norm and rewrite a ruleset in order to produce a new sport/game, their creation, Speedgate, appears to be a coming together of several different rule sets to create one innovative game. This is no surprise when we find out the AI which was used.

The developers at AKQA trained a recurrent neural network and a deep convolutional generative adversarial network on over 400 sports. To train this neural network, it used NVIDIA Tesla GPUs and it was able to generate over 1,000 different sports ideas (as well as training it with 10,400 logos allowing the creation of their logo and slogan seen below) alongside rules and concepts for them. Having analysed the results and sifted out those ideas which did not meet their criteria, play-testing proved Speedgate to be the best option. This is because AKQA wanted their creation to be an ‘ideal package’ in terms of workout and difficulty level as well as being enjoyable for those playing it.

“GPU technology helped us to condense training and generation phases down to a fraction of what they would’ve been. We would not have been able to achieve so many unique ML contributions in the project without that speed. It gave us more time to test, learn and adapt, and ultimately helped to produce the best final result.”


As of this moment, it is exciting to be able to say that Speedgate is very much a playable sport and is a ‘one-of-a-kind’ in its field. Having been born out of an experimental project for Design Week Portland Festival, the AKQA team is in talks with the Oregon Sports Authority to gain actual recognition as a real sport. There is even talk of a Speedgate league being created this summer allowing the public to participate in this new and exciting sport.

As we continue to battle the COVID-19 pandemic, the hospitality industry is looking to technology as a way to keep workers safe. Could robot waiters be the answer? In...
From the way we shop, to the way we learn, the digital world in which we live is unrecognisable from the reality of a decade ago. One area which...
With an estimated current global market value surpassing 406 billion USD, the fashion industry is one of the most significant yet vulnerable industries out there. In an ever-worsening socio-economic...
Hoy en día mantenemos la incertidumbre de cuándo dispondremos de una vacuna o cuál será el impacto real en la sociedad y en la economía que nos deja esta...
Throughout the COVID-19 pandemic, video-conferencing has become the backbone of both our work and social lives. Today, on #WorldHugDay, we take a look at some of the ways in which...
As Christmas approaches this year, we have all been gifted the great news that the Pfizer/BioNTech vaccine has shown to be both safe and effective in creating an immune...